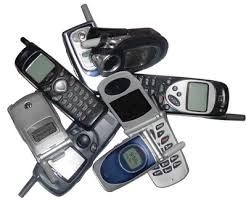 ETech Recyclers accepts all makes and models of used cell phones for recycling, refurbishing and donating.  All data is 100% guaranteed to be destroyed prior to these services.*

Did you know that more than 100,000,000 cell phones are thrown out every single day?  That’s alot!  Your cell phone may seem small, but when they get piled up in our landfills, they cause environmental problems.  Don’t make the mistake of throwing out your old phones, recycle them with ETech Recyclers.

Just how bad are cell phones for our environment when they’re not recycled properly?

When cell phones are improperly recycled or end up in landfills, it ultimately causes negative effects to nearly every system in the human body. Mobile phones contain harmful toxins including lead, mercury, arsenic, cadmium, chlorine and bromine, which can leak into the groundwater and bio-accumulate in the food chain causing detrimental damage to the soil, water supply, vegetation, animals and humans.

Lead is found in a wide variety of cell phone components including the circuit boards, batteries and as a stabilizer in PVC products. Lead exposure can cause damage to the reproductive, blood and nervous systems.

Mercury is used in the cell phone’s battery, crystal displays and circuit boards. A single cell phone contains up to 2 grams of mercury. Mercury exposure contributes to brain and kidney damage.

Arsenic is found in the microchips of many electronic devices including mobile phones. In high doses, arsenic poisoning is lethal. Low levels of exposure cause negative impacts on skin, liver, nervous and respiratory systems.

Cadmium is used in the battery of a cell phone. It is associated with deficits in cognition, learning, behavior and neuromotor skills in children. It has also been linked to kidney damage.

Chlorine is a component of plastics used in cell phones, specifically polyvinyl chloride (PVC). PVC makes up about 30% of the cell phone. Exposure to improperly disposed ­­­­chlorine causes tissue damage and the destruction of cell structure.

Bromine is a component in a group of fire retardant chemicals known as brominated flame retardants. It is associated with cognitive and developmental deficits. Studies have shown that bromine contributes to the disruption in the thyroid hormone balance, brain damage and cancer.

Don’t throw it away, recycle today!

3 Blocks east of Nevada and 1 block south of Fillmore, next door to the Mill Outlet Store and across the street from the Peak Bowling Alley.